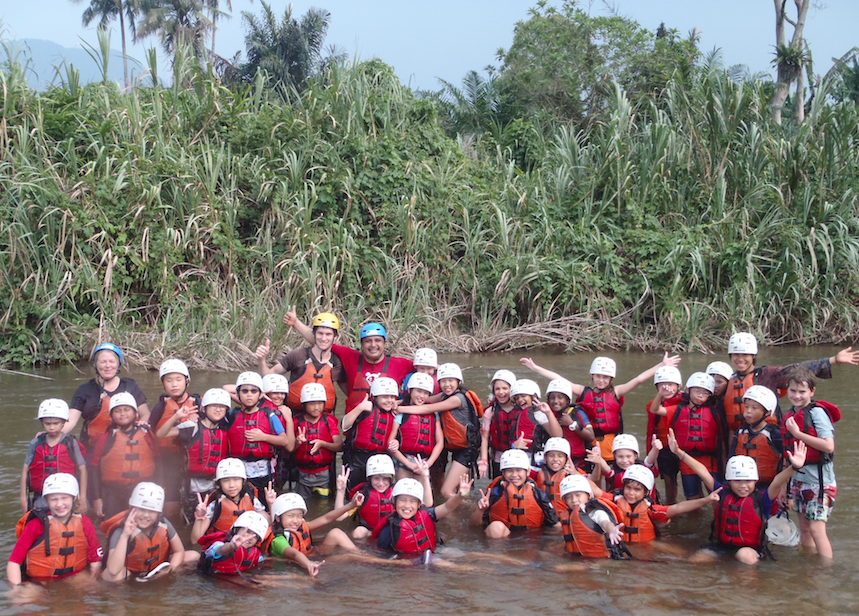 “Year 6 Borneo Camp, Update, Day 2
Team 1 headed off to the Jungle Survival Camp, reached after an hour’s trek through the rainforest. Once there, they chose suitable trees between which to rig their hammocks, mosquito nets and ‘bashers’ (roofs to the un-jungle trained!) The guides then introduced the children to jungle survival techniques involving food (building traps), water (finding it), fire (making it) and shelter (building it). Dinner was followed by a campfire accompanied by roasted marshmallows.”

Last week, I asked a group of Year 8 and 9 students which school trips they remembered from their time in Primary school. Unanimously, they said they remembered every single one of them. Our Primary camp weeks are coming up fast, and as someone who is both a teacher and a parent, I have been thinking again about how important the experiences our children get from going away with their friends and teachers are, and why they need to be a compulsory part of every school’s curriculum.

I often help brief parents about sending their children away on our residential camps, and since being here in Malaysia, I have been in the jungles of Borneo, Gopeng and Ipoh with the children, so know exactly what they are in for. Be it Borneo, or the Isle of Wight, it always makes me really excited as a teacher to be able to offer such great experiences to our students.

I am a parent too, and on reading the email above from my own child’s camp last year, my maternal instincts cut in. My son is only 10, surely he isn’t really old enough to be sleeping in the jungle in a hammock he has “rigged” himself? My son, who can’t manage to get his own dirty clothes into the laundry basket, let alone off the floor… he can’t be? To most ‘Ten-agers’ though, camp, is as normal a part of school as music, maths or mandarin, but us parents still worry about our children tramping through the jungle, building traps, and squashing into hammocks above ants and spiders. So perhaps the point of camp is as much about us and starting to let our children go as it is about the learning and excitement they will get from going?

But I know we parents still worry; why is it necessary for our children to go out into ‘The Wild’ for a week, when they could no doubt get a reasonable approximation to the experience in a mock up in one of KL’s air conditioned malls? Well, although they didn’t know it, Judith Carlisle, Head Teacher at Oxford High School, and Colin Smith, Chief Engineer, Rolls Royce, summed it up recently in the The Sunday Times about the benefits of making children contend with challenges that they might fail at. Judith first:

“It’s about the principles that every parent wants, that their child grows up as happy as they can be and as robust as we can get them to be, and that they learn more by failing and not getting it right.”

“Bring back the sense of wonder. If you get that in your brain then you’re hooked.”

Sense of wonder! Children can’t get that in a shopping mall mock up, but in the mythical jungles of Borneo where headhunters still roamed until the 1960s, they really do. There’s real indigenous tribes, blow pipes, spiders, leeches, raging rivers, and dirt. Not virtual Minecraft dirt, but fallen from a thousand year canopy dirt. Learn from your guide, work as a team, build your shelter well and tie your hammocks tight or you’ll be sleeping in it, dirt. You can’t recreate that, it is something that can only be learned from experience.

The rivers are cool and clean though, and so are the camp showers, so any children that become too enamoured with the ancient terroir soon freshen up ready for the next chance to have fun proving themselves to their friends. So much so, that it’s noticeable how the children that spend time in the dirt on the first night, are the most focussed and committed team players when it comes to building rafts to ride the rapids and keeping alert for leeches on the jungle treks – as according to the guides it’s “lucky if you get leeched”. That’s what Judith Carlisle means by robust!

Not only that, but this quote from a child as he jumped out of the raft at the end of a long afternoon on the river in Gopeng with his team, surely contains a lot of what Colin Smith means by a sense of wonder?

I mentioned before, that the Secondary children I spoke to remembered ALL their school trips and camps, and remembered them in considerable detail. They talked about how they did things they never thought they could have done before, how they faced and overcame challenges and how proud that made them feel. How, on the longest island to island zip wire in the world, they actually felt like they were flying; how they climbed right to the top of the pole at mountain school before leaping off to grab the trapeze; how working as a team, they crossed the river safely and learned how to raft. They also talked about how good their food tasted after serving meals to their friends, and how they learned to wash dishes and clean up after themselves.

Sadly I was out of the country at an education conference when my son came back from Borneo last year, but he sent me a text to tell me all about camp. ‘Ten-agers’ don’t waste words. His text just read #AWESOME!

But it didn’t stop there. #LIGIT #SWAG #O.P. I have no real idea what those words mean, but I understand completely what they say. My son had had the best week of his life.

This is like a breath of fresh air. From the incredibly insightful article, brilliantly written by my good friend (full disclosure), to the quality and thoughtfulness of the responses, it is great to ...
Chris, I couldn't agree more about there being a vast range of strategies, tools and approaches that are constantly needed to support the best possible learning opportunities for all our children in s...
Giles, thank you for taking the time to comment. It surely is a frustrating time for everyone involved in the current closure of schools across the world. I am conscious that I write from a different...
Thank you Sue for presenting a well balanced and well informed paper for discussion. I am of the view that there is rarely just one way of doing things. As learners we need to learn previous knowled...
It's great to see a head teacher taking such a proactive and creative approach to today's challenges. It also puts many UK educational establishments to shame: although some schools are doing their b...
Thank you Joy! The resource my colleague put together that I have linked in the article, if full of great ideas for Secondary colleagues. Good luck with it all....
June, I completely agree. The way our children adapt so quickly and positively never ceases to amaze me!...
Justine, it is so pleasing to hear that the young people you have spoken to are looking forward to getting back to school. I know every student and teacher I have spoken to is in complete agreement. P...
Shellee, I agree that there are benefits of this current way of working, and I am excited to consider how we look carefully at the ‘silver linings’ that have come out of this experience already. ...
Tiffany, I could not agree with you more. Thank you for your thoughtful comments, and for highlighting the importance of our strengthening pedagogy (something I am keen to continue to investigate) an...
Liz, thank you for taking time to comment. I think you are right in that 'teaching' will be changed by this experience. Perhaps the worksheet really will become homework of the past!...
Sarah, thank you so much for your comments. I agree wholeheartedly that school is about so much more than educating our children in literacy and numeracy. Perhaps this is the push we all need to truly...
Thank you for sharing your experiences and the resources you and your staff have found helpful, Sue. One of the things I admire so much about educators is their willingness to help one another! I am f...
An excellent article, plenty of practical advice for such challenging times. I think the lack of face to face social interaction will make all people appreciate their communities more once this is all...
This is an amazing blog, Sue. It came to me through Facebook. Could you send it to me again via email? I don't know how to share it from FB to my teacher/administrator friends. Email would make it sh...
Thanks for a great article which is so insightful in describing this surreal situation that our school communities find themselves in. Some of the hardest things are planning for this 'new' way of le...
Well written and very informative. Change is hard for everyone. The change happens quick the transition process is a lot slower. That just takes time and I think our children are probably a lot more a...
Every teacher in the UK would benefit from reading this article written in Hong Kong by an experienced head teacher who started her career in London state schools. In the UK we are in our third we...
This is an extremely informative and practical article which not only discussed the academic impact of working online, but importantly, also focused on the wider scope of student learning. The learn...
This is very interesting information about the process of learning teachers and students are adapting. Our children in New Zealand have been well supported by staff who had little time to prepare. The...
Sues congratulations on another year full of inspiring observations and efforts. Your mushrooms are very lucky indeed. Keep on keeping on!...
A beautifully written piece and one that I can relate to. I particularly like the Mushroom field/farmer analogy. You clearly know how to motivate people to achieve success. Good on you!...
Great blog and great advice! Take some time out and make sure you have those holidays booked!!...
I really enjoyed the bit about Sir David Brailsfod....
Wow!Excellent!Did that take all summer to write?????...
Mushrooms - cover them in s*** and keep them in the dark???...
An inspiration to newbies! I totally agree with comments below and believe the leadership and culture advice applies across all disciplines....
Really interesting to non-educationalists too Sues (and love that Pat Lencioni gets a mention). I’ve got some interesting stuff on culture by Cameron and Quinn that I’ll share by email....
An interesting and reflective piece. I agree about the importance of "culture" and how long its roots are - very difficult to quantify but immensely influential on pretty much everything that happens ...
Thank you so much for posting such an informative blog. It has been helpful in updating my resume and cover letter for my Special Education job search abroad....
This error message is only visible to WordPress admins